2020 was a strange year for most people, and the same was valid for online storage auctions. Unless you were born IN the year 2020, you heard all about COVID 19 and the “new normal” we all needed to navigate. For the first time, storage auctions were either banned or suspended due to state mandates and a massive unemployment crisis. There were little to no storage units sold from March through June of 2020. Storage operators, auctioneers, online websites, and bidders all felt the impact of the virus.

Thankfully, bidders and operators were able to rally during the second half of the year, when we saw record-breaking unit prices. Below, you will see the top-selling units on StorageTreasures last year and one honorable mention unit for reaching new heights in the first half of 2020 during a global pandemic. 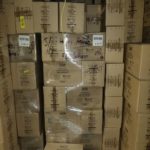 A 10×10 unit was full of unopened boxes of water filtration systems. The boxes were labeled Brondell, H20+ for better water. A quick search of these items shows they sometimes sell for up to $400. The unit was full of unopened, wrapped boxes. The facility description also listed household furniture, mattresses & bedding, and personal effects. Those additional items were icing on the cake for this unit. 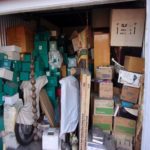 When first looking at this unit, a large stack of beautiful teal boxes stands out. Once zoomed in, you can see the boxes are labeled “Classics Walt Disney Collection.” Classic and Disney is always a winning combination. In addition to the potentially hundreds of Disney collectibles boxes, this large 10×20 also contained household items and other décor. All of the belongings in the unit appeared to be in excellent condition. Items in the front of the unit were covered in dust, indicating nobody had entered the unit in quite some time. Units with dust are always a bidder favorite. 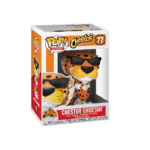 I had to do a quick internet search of “Funko Toys.” I recognized them immediately as the small, plastic figurines representing pop culture characters. Funko toys represent popular characters from hockey players to characters from the TV show, The Office. Amazingly, these little toys are incredibly valuable. The company that makes the toys claimed $686 million in sales in 2018. The most valuable Funko Pop toys sell for thousands of dollars. This 10×30 unit was filled with pallets of neatly wrapped Funko Toy boxes. It probably took a while to resell all of these toys, but it surely brought a nice, tidy profit. 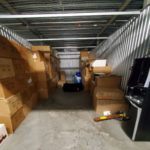 This unit was one of those units in which experienced buyers of storage auctions could see something I could not.  There are some visible boxes and a golf bag; nothing that grabbed my eye. Several bidders felt the items inside were worth almost $20,0000 as 127 unique bidders bid on this unit. There were some hats and golf shoes visible, and they all seemed to be great brands of good quality. The boxes were numbered as if they might have been inventory to be sold. Hopefully, the right buyer got top dollar for the items in this unit. 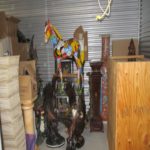 After seeing three Illinois units, we finally move south to the Sunshine State, and wow, this unit did not disappoint. The sixth highest-selling storage unit of 2020 was filled with large, colorful home décor and art pieces. The furniture in the unit appeared to be of very high quality. All of the items were carefully stored, with some items still inside moving crates. If you are the lucky winning bidder of this unit, we would love to know how well you did after the sale. 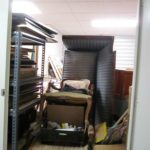 This unit was one that required the heart of a gambler to win. There are stacks of framed artwork, but they could all be Bart Simpson from what I can see. There are some beautiful pieces standing alone that you can see with exquisite, professional frames. The storage unit itself is well lit and looks more like an office. It is almost sure the monthly rent was higher than a typical storage unit. It’s likely the overall quantity of artwork is what drove the price of this unit to over $20,000. 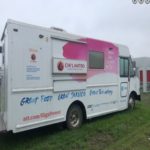 The description of this truck is listed as a Freightliner Van. In theory, it could be used as something other than a food truck, but inside it has an area for preparing food, cooking stations, coolers, and an ice machine. The food truck was previously used to prepare Korean-Mexican fusion food. It was also used as an advertising medium, as evidenced by the AT&T logos appearing on the side.  The listing also says it was “truck 2 of 2,” meaning this tenant also had another truck for sale. The second truck did not make our top ten list, but this was likely a massive score for the winning bidder when he or she found a buyer. 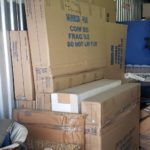 I had to look at this unit for a while to figure out what the draw was, and then it hit me. This unit looks like my mother’s craft room. She loves to collect and make things and sell them on eBay or Facebook Marketplace. All of the contents appear to be household items. They don’t look like a store inventory. There are nicely packaged boxes for mirrors or paintings. Totes labeled floral or craft supplies, Legos, and figurines. There are also American Girl Doll boxes, which sealed my opinion of this unit. Those dolls sell like hot cakes on the reseller market. The variety of different resalable items in this unit made it worth the $25,000. 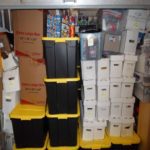 Every year when I write this article about the best-selling units, there is always one unit containing comic books and collectibles. This particular unit was 10×12 and full. The first thing that catches the eye is the standard white rectangular boxes typical for storing comic books. Also, there are several excellent, sturdy, high-quality totes and boxes neatly stacked. There are also some sports memorabilia and pop culture artifacts. This unit was a collector’s dream. 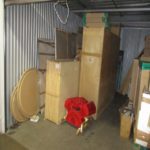 This 10×20 didn’t look like it had much in it at first glance. There are nice crates and some wrapped items. There are some freestanding art pieces and what looks like a fancy car engine. Upon further investigation, the name David Datuna appears on the side of one of the crates. David Datuna is an NYC based artist from Georgia (the country, not the state). He once sold a portrait of Vladimir Putin for $269,000. There is also a box labeled “art Miami” which could have included pieces from his Viewpoint of Billions series that was showcased at Art Basel in Miami. If only one of the crates in this unit contained an original work by Datuna, this unit could have been worth hundreds of thousands of dollars. 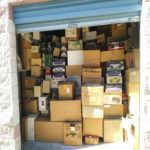 During the pandemic and the following eviction moratoriums, many storage operators did whatever they could to make deals with their tenants so they could keep their things. One of those deals included having the tenant sign an abandonment form and turning the unit over to the facility to sell the items. When a unit is sold with an abandonment agreement, proceeds do not apply to the tenant’s past-due account, so the unit will be sold as a “non-lien” unit. This non-lien unit sold for almost $15,000 because it contained model cars and boxes of collectibles. The unit, a 10×30, was packed full and neatly stacked. The winning bidder on this unit had a lot of fun finding out what was stored behind that first layer of boxes.

Do you want to see the Best Selling Units of 2019 too? Click HERE. Will you be one of the lucky winners to snag a unit on next year’s list? Start bidding today on www.StorageTreasures.com. Are you new to storage auctions and curious about how it works? Check out our Help Center for more information.